Should your school or business have panic buttons?

During the 2005 Super Bowl, Staples unveiled three 15-second commercials featuring the Easy Button. No matter how difficult a situation, simply pushing the Easy Button solved the problem. These buttons were eventually sold on their official website, and are still available today. However, to the great disappointment of one unnamed consumer, the button didn’t actually solve all problems…

That being said, some amazing things can be accomplished with simply the push of a button. For example, panic buttons.

What are panic buttons?

The term “panic button” actually originated with US Air Force pilots during the Korean War. When a pilot pushed the eject button or a button that activated other emergency measures on the plane, fellow pilots would say “He pushed the panic button.” It was a means of razzing one another. Eventually, the term became more widely used, and it soon entered the English lexicon.

The original panic button was installed in B-17 and B-24 bombers in World War 2. An onboard intercom was used to communicate with the paratroopers in the plane, but if this was damaged, a backup bell system was used – activated by a button. When this button was pushed, it was the signal for the troopers to bail out.

Today the term panic button is most commonly used to describe a security measure often seen at banks. If you’ve watched a movie that featured a bank robbery, you probably know what these are. Panic buttons are physical buttons or switches that are mounted under the teller’s desk at a bank. If he/she is under duress, they can simply push the button, sounding an audible or silent alarm.

What else can panic buttons do?

Generally speaking, panic buttons all serve the same purpose – to alert others to a dangerous situation and call for help. But depending on the device. this alert will take different forms.

Handy right? We agree. But besides banks, where else could these buttons be used?

Who can benefit from panic buttons?

We wish we could say they aren’t necessary, but in this troubled world, a better question to ask might be, “Who couldn’t benefit from them?”

Violent incidents in the workplace, public buildings, and schools are on the increase. Banks, convenience stores, gas stations, cell phone, and electronic stores, and pharmacies are prime targets for theft. Government buildings and schools have become a common target for shooters and other attacks from disgruntled employees or students. Hospitals could also benefit from them, since health care workers such as doctors and nurses are often subjected to abuse.

So the reality is, there is a wide range of applications for panic buttons. But are there any drawbacks to physical panic buttons? 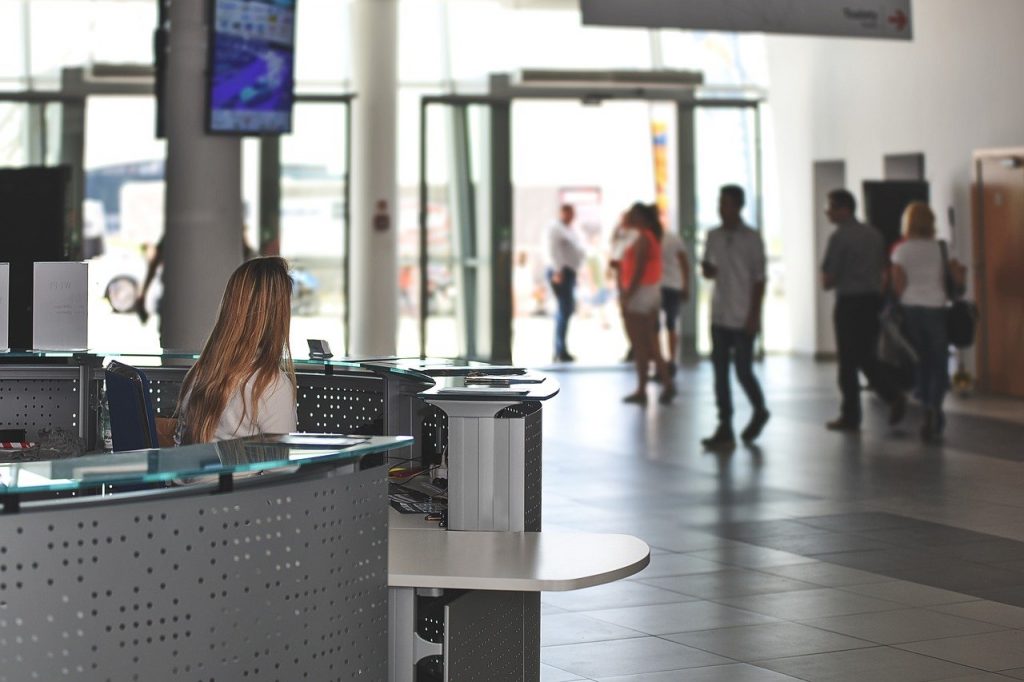 How many panic buttons do I need?

This largely depends on the size and layout of a space. But a few general suggestions can be applied by most businesses or schools.

If there is a reception area, it would be a good idea to place a button here, perhaps under the receptionist’s desk. After all, if a disruptive individual enters the front door, they will likely be the first person to encounter them. Other common areas should have a panic button as well, such as a break room or main office area.

For warehouses or larger buildings, panic buttons should be placed in areas in view of any rear doors or alternate entrances. That way if an intruder makes their way in through there, an employee can see it and sound the alarm.

What are the concerns with physical buttons?

Physical panic buttons are useful in their simplicity. When the button is pressed, you’ve done your part. The alarm has been sounded and now you wait for help to arrive. But there are some potential downsides.

Physical buttons need to be wired to an alert system. As a result, installation costs may be pretty high, especially if there are multiple buttons in the building. If wireless buttons are used, they often feature Bluetooth connectivity, which is great. However, that means the location of the button needs to be relatively close to the main alert system. So this will limit where you can install the buttons.

It also means that when an emergency situation arises, you’d better hope you’re near the button. If you can’t reach it, or it’s in an inaccessible area then it’s about as useful as a kickstand on a submarine.

So we understand there may be some disadvantages to physical buttons. But what other options exist?

Communication technology has progressed rapidly over the last decade. No longer do we have bulky bricks with flippy bits and expandable antennas. Now we have miniature computers in the palm of our hand. Not to mention that before cell phones, we had to rely on landlines, telegrams, and carrier pigeons. Safe to say, these advancements have mostly seen positive benefits, especially for those with a feather allergy.

The advancement of artificial intelligence and IoT (internet of things) technology has enhanced communication even further. And no, we aren’t talking about Siri and Alexa. We’re talking about the ability to call police, fire, and ambulance at the push of a button.

Panic buttons aren’t just limited to a button on a wall or desk anymore either. Emergency alert apps are now available for phones, tablets, and computers.

What are the benefits of app-based panic buttons?

Don’t get us wrong – physical panic buttons aren’t useless. That being said, app-based panic buttons have a few features that set them apart from their smooshy counterparts.

For one thing, app-based panic buttons are not tied down to any specific location. They can be activated from a computer, tablet or probably the best place: our phones. Most of the time, our phone is on our person. That means you essentially have a panic button in your pocket, with the ability to pinpoint your location when first responders arrive on the scene.

Check out the news clip on our partner, InForce 911 app being implemented in Massachusetts schools.

They relay information in milliseconds

The 2nd benefit to these app-based alert systems is the speed at which information is relayed. When you press the button on your phone, an alert goes out to all staff at the school or place of business, as well as local police and emergency services. Within seconds, police and first responders will be on the way.

The quality of relayed information is invaluable

A 3rd advantage app-based systems have over physical buttons is the quality of information sent. While a physical button will alert to the fact that there is an emergency, no one but the people in the room know what the nature of the emergency is. Is it a disruptive student or customer? A shooting? A fire? 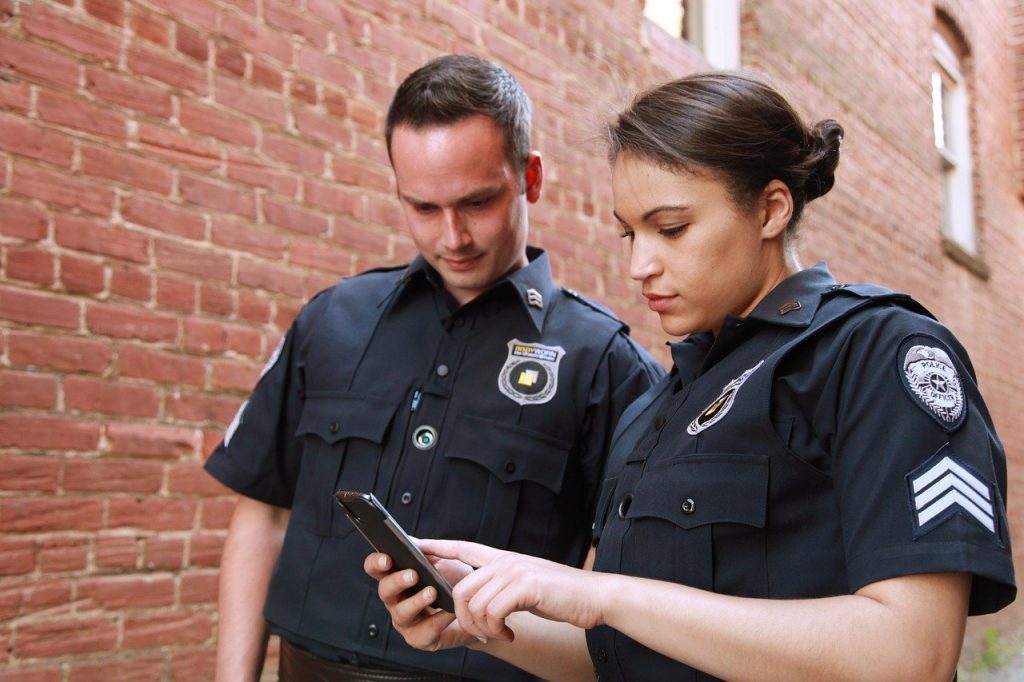 App-based systems feature an interface with 3 or 4 buttons, which allows you to quickly specify what is happening. As a result, emergency services know what they’re walking into and how to respond. Most apps also pinpoint the room where the alert originated from, as well as a digital floorplan of the building with the danger area highlighted. These floorplans show windows, doors, and more so first responders can act fast.

They allow you to talk directly with police

A 4th advantage comes with the messaging feature found on some emergency alert apps. When you press the panic button, not only are police alerted, but a chat window also opens between you and the officer, with his name included. There you’re able to communicate directly with them (if safe to do so), and fill them in on any additional details.

How much do panic button systems cost?

Installation costs will vary depending on the number of buttons you need. Generally, there is a cost to the button itself, along with a monitoring fee that may go up with each physical button. Expect to purchase each button for around $100, and to pay monitoring fees around $10 per button.

Then there are app-based systems, which again has another advantage over physical panic buttons – they generally cost less. Because you’re paying for the software, not any hardware, your overheads are lower. You can purchase a company- or school-wide system for as little as $20 a month. That being said, the price may go up depending on the number of devices or users connected.

How can I be sure about what I need?

The best thing to do is talk to an expert. BeSafe Technologies offers onsite and online safety assessments, that include Panic Button apps and other communication tools. A trained security expert is ready to consult with you online or to visit your facility, assess your building security needs, and make suggestions accordingly.

To schedule an online or onsite facility safety assessment, contact us today.