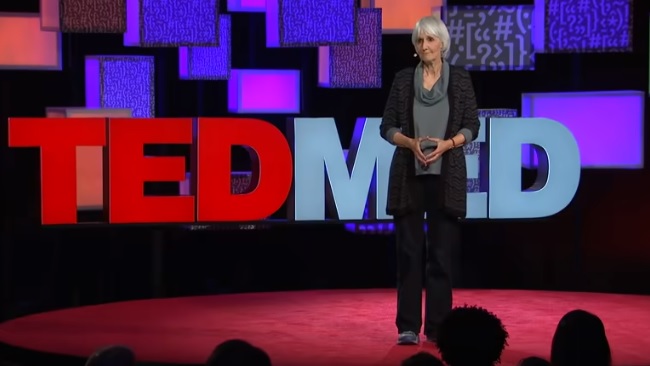 Violent entertainment. Too easy to get guns. Rise in mental illness. Lack of training. There are a number of reasons people point to in order to understand why school shootings happen so often. But regardless of the reasons why, the fact remains, school shootings are now a reality of our modern age.

However, by asking the “why” and “how” questions, we may be able to reduce the amount of school shootings, decrease their severity, or even prevent them all together. There is very likely more than one answer or solution.

TED Talks have been an amazing educational resource for millions of people. Multiple experts, survivors, and even ones who have nearly carried out the act themselves, have used this platform to weigh in on the subject of school shootings.

Here are our favorite TED Talks on school shootings.

Artistedes Jimenez is a police officer for the SAPD in San Antonio, Texas. He has seen many things in his law enforcement career, but one will stick with him the most. He was a first responder to the worst active shooting event in Texas history, at the Sutherland Springs Baptist Church in 2017.

During his 32 years of duty and counting, Chief Jimenez has been educating people about public safety and crisis response. He’s currently a Certified Instructor of the Texas State University Law Enforcement Rapid Response Training, and serves as Chief of the Community Readiness and Intelligence Division for the Bexar County Sheriff’s Office.

As he brings out in his TED Talk, we all need to be better prepared for shootings and other violent events. As he puts it: “You are the actual first responder in an emergency.” When we are in a high-stress situation, our brains default to instinct, or our plans. Which is why it’s so important that we plan ahead.

All of us have taken part in fire drills more than once in our lifetime. We learn the exits, locations of fire extinguishers, the quickest routes out of the building, etc. Chief Jimenez teaches us how we can mentally plan and practice active shooter drills no matter where we are – the mall, the restaurant, or the doctor’s office.

It isn’t fun to think about. But thinking about it ahead of time could save our life and the lives of others.

I Was Almost A School Shooter | Aaron Stark

Aaron Stark was just your average teenager growing up in suburban America. He played video games, watched movies, hung out with whatever friends he had. Unfortunately, like many kids in America, he was subject to constant bullying at school, and daily abuse from alcoholic parents.

His depression grew. He began practicing self-harming. Child and social services failed him after he was handed back to his abusive parents. They school bullying continued. The more he was abused, the more he acted out. He would steal from his friends, push people away, and build barriers. Many of these, understandably, started to distance themselves from Aaron.

Aaron had enough. He easily bought a gun from some gang members. All it took was a small amount of weed. Aaron decided that it would either be his school or a mall. It wasn’t about the people. Just maximum damage.

But there was one friend who wouldn’t leave Aaron. One friend who was patient with him, and no matter what happened, he just treated Aaron like a normal person. He showed genuine interest, showed empathy and love.

It was this feeling of finally being wanted that moved Aaron to abandon his violent plans. It took time, but Aaron got better. He’s now sharing his story with whoever he can.

His experience provides some insight into the mindset and circumstances of many who commit these violent acts. Aaron argues that they need more love and attention, more empathy, rather than being treated as FBI persons of interest. It raises questions about the systems in place that are supposed to help our troubled youth, and whether more needs to be done.

My son was a Columbine Shooter | Sue Klebold

The shooting at Columbine High School in Colorado is one of the worst – and most notorious – school shootings in history. It sparked many questions, and angry sentiments, from families of victims, local citizens, and the media.

One unfortunate recipient of that hate was Sue Klebold, the mother of one of the two shooters. “Every time someone asked, ‘How could you not have known?’ was like a punch in the gut,” she laments.

But she’s not looking for sympathy. Like everyone else, she wants to stop school shootings once and for all.

Sue shares some of the behavioral patterns, circumstances, and events in her son’s life that led up to that fateful day. Many of these “signs” were only noticeable after the fact. In a time that mental illness was even less understood than it is today, it was impossible to foresee what her son was going to do.

Sue believes he wanted to die. What she doesn’t understand is, how did suicidal thoughts turn to homicidal ones? What is the link? What is the tipping point? If simply showing love was all it took to keep suicidal individuals from taking their own life, then wouldn’t suicides stop altogether?

There has to be more to it, and Sue hopes that we will be able to further investigate and understand mental illness so that those who need help can get help.

Sue Klebold is not in an enviable position. But it’s commendable that instead of hiding away from the world and hoping to avoid conflict, she’s willing to step out into the light and use her unique platform to tell a powerful message. She shows amazing poise and courage in a must-see TED Talk.

School shootings can be prevented — here’s how | William Woodward

As discussed in the outset of this article, after school shootings, the questions fly. Then the suggestions fly. These quick fixes will solve the problem! Background checks, have one entrance, give guns to our teachers, make kids wear clear backpacks… The list goes on.

Not that these suggestions don’t help. But there is no quick fix to stop school shootings. Full stop. A complex problem requires a more comprehensive solution.

The United States Secret Service conducted their own investigation into school shootings, and they came

to this intriguing conclusion:

Only a safe school climate can successfully stop school shootings.

Now we aren’t talking heating and air conditioning here. A safe school climate means a safe atmosphere. A positive, peaceful environment and good relationships among students and faculty. So how does a school go about creating this safe climate?

William Woodward is a faculty member at the Center for the Study and Prevention of Violence (CSPV) at the University of Colorado-Boulder. He served as a member of law enforcement for over 15 years, and he trains school leaders how to implement the Safe Climate Safe Schools program developed by the CSPV. So he knows what he’s talking about.

Watch his TED Talk below to learn the 7 steps to their comprehensive school safety plan.

There is no “quick-fix” or “one size fits all” solution to school safety and security. As we can see form the diverse range of TED Talks about school shootings, there are a number of issues to consider to solve this problem.

But there are a number of things we can do to make our schools a safer place for kids and adults alike.

BeSafe has been dedicated to school and workplace safety for over a decade. From cutting-edge security technologies, to our rich library of safety and security resources for schools and businesses, we hope to make our world a safer place for all. To learn more, contact us, or check out our articles and reviews on our website.